Some atomic nuclei are energetically unstable and can undergo spontaneous radioactive decay to form a more stable nucleus. The process of radioactive decay is purely random and, in a given fixed time period, a nucleus has a fixed probability of decaying. The process is also memoryless. This means that it doesn't matter whether the nucleus has gone one time period without decay or one hundred time periods, the probability of decay in the next time period remains the same.

A time period of particular use is the time for which the probability of decay is 0.5. Such a probability means that over the time period, half of the nuclei will decay and half will not. This time period is called the half-life of the nucleus. If I start will 100 g of a radioactive element, then after one half-life there will be 50 g remaining. Remember the decay is memoryless so that waiting another half-life will reduce the 50 g to 25 g as there is a fixed probability of decay of 0.5 for each nucleus and, as there are half as many nuclei to start with in this time period, the total number that will decay is also half as many.

The number of nuclei remaining afer \(N\) half-lives, \(A_N\) is given mathematically by $$ A_N = \frac{A_0}{2^N},$$ where \(A_0\) is the initial number. If you are only considering the nuclide that is decaying the above equation also applies to the mass. Care must be taken with mass however! Consider 100 g of polonium-210, \(^{210}Po\). After one half-life (138.38 days) there will be 50 g left. However, there will not be 50 g of its stable decay daughter lead-206, \(^{206}Pb\), as each nucleus of lead has approximately 2% less mass than each nucleus of polonium, leading to there being about 49 g of lead. The missing mass is largely accounted for by the alpha particles (a helium nucleus consisting of two protons and two neutrons) emitted during the decay process.

The interactive element below simulates the radioactive decay of red nuclei to yellow nuclei. Three different half-life values can be selected and line markers are applied at every half-life interval. Notice how in each interval, the number of red nuclei halves, following the equation given above. 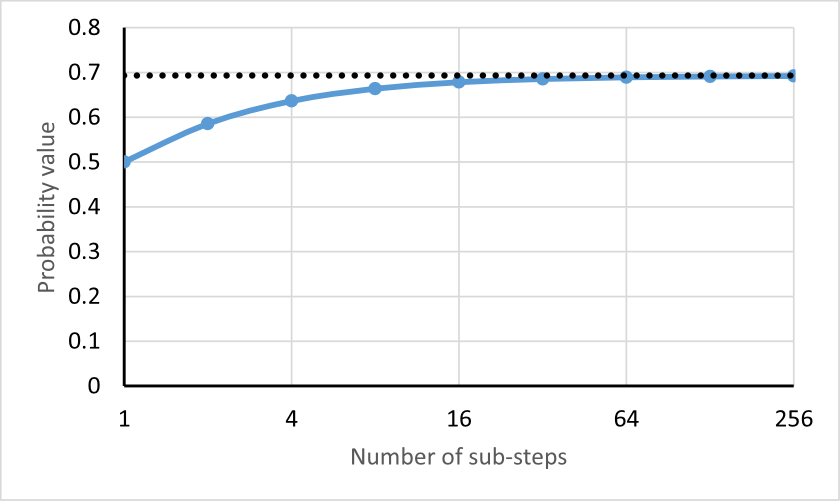